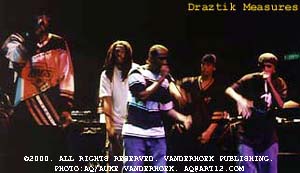 ART12 schreef er het volgende over: “The Docks were represented with a big crew: one DJ and six MC’s. Drastic Measures. After some problem with a suddenly broken down mic, host Shockwave handed over his mic. Normally the mics of the host will be kept separate to avoid differences in sound quality of the performing acts. They delivered a very tight show.

Killa Tactics specialist in Turntablism, dropped the best show according to the audience. In the final call every competitor, except Nonna, stood up to challenge the audience choice. Including a new kid on the block, Bonez. The audience had to decide who was allowed to challenge it’s first choice Killa Tactics. Although Bonez was told to get on stage by several people so peeps could see who the new competitor was, Bonez did not show himself. The audience decided that Drastic Measures were the one to challenge. It became a very close call. Which Killa Tactics won..”